On a cold, wet and at times hailing evening the year 7 Netball teams played 3 fixtures. Teams from Campion and Princethorpe came over to challenge the 3 teams.

The Pink team played against a Campion side, for this team this was their first fixture representing Southam College. Some fantastic shooting in the first quarter from Persia saw Southam sneak ahead 3-0. The defensive unit of Zoe and Nancy kept Campion out of the circle by making interception after interception seeing the score finish 9-0 to Southam.

The Red team played a different Campion team however saw a similar quality of netball and commitment from the girls. Similarly the girls took an early 3-0 lead with good shooting from Freya and Scarlett. The girls moved the ball down court really well using Justine at each end of the court. Campion struggled to get the ball into the circle as Minnie was flying around the court making regular interceptions and tips. Holly stood out as a strong and versatile playing being able to make well timed interceptions and accurate shooting in the final quarter. Final score 10 -3 to Southam.

Finally the black team played against a strong Princethorpe team. At this time the girls were absolutely soaked but still in high spirits. After a great start the girls saw themselves sneak ahead by 2 great shots from Amelia. The Princethorpe team found it difficult to move the ball into the circle due to strong defensive performances from Alice and Chloe H. As the match progressed there was some very scrappy passages of play due to the competitive nature and slipperyness of the courts however the girls battled through and showed determination throughout. Chloe S dominated the game in the 3rd quarter by making regular interceptions and moving well across the court. The final score saw Southam win 7-3, which is a fantastic result.

Three great quality games were played this evening in extremely horrible conditions. Reminder, please make sure you have suitable clothing even for fixtures.

Well done tonight girls, we were really impressed with you, good preparation for next Wednesdays fixtures.
Mrs Turton and Miss Maclachlan 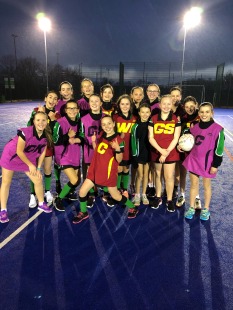 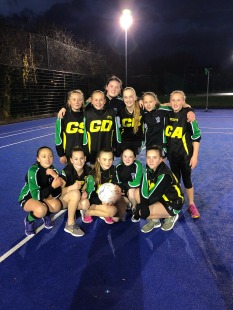