We took a 19 man squad away against west academy Coventry this Saturday with at least another 8 lads unlucky to not get selected or that were unavailable.The team had worked in training on a number of moves and the focus was to put them into the game after 2 top training sessions. A big thanks to Mr Etough and Robinson for their continued excellent support.
The first few minutes seemed a little lack lustre until pack leader Lewis S smashed a ruck and then began to carry the ball to the opposition. Charlie S. elegantly  went over for one of his 4 tries – he worked the ball well and ran hard. Thomas H. was welcomed back to the squad at outside centre with a great break off a backs move as he sliced through the academy defence. The lads started to get patterns of play after well won rucks. Lloyds side step and run was worth the entrance fee in the first 3rd as showed balance and pace to beat all   around him for a potential champagne moment. Sam R. at fly half represented the first half with his great link work. He kept structure to the game let the fliers run. Great unselfish play. Josh E also linked with both forwards and backs to create space for players. He was rightly rewarded for a pick and go at the base of a ruck as he side stepped over for a try.
Changes were made into the next third and to be honest although 7 tries were scored we did not play well in that we relied upon playing down the centre too much. We had done the hard work, it was time to exploit the width of the pitch. That said Austin O – with a great rip and dive deserved his try and great credit,   and Oli G. played brilliantly in ruck situations. Thomas W. also secured good ball in the ruck, showing intelligence. Lewis S. went over after a break by Thomas H. who claimed his second of the game with a great side step. Charlie S. made a great intercept for his 3rd. Josh E made a great snipe for his second. Other than rucks however it was a little too individualistic.
After a talking to the boys played much better in the last 3rd. Ali M. should take credit for his offload game and he scored off a penalty move to open the scoring in this final 3rd. Josh E then gave a long pass out to Charlie F who gave them all the slip to power over. Will M. made some great direct runs bouncing off players, showing real physicality. Will H made great tackles late on and there were some barnstorming runs by Hayden W. who if he protects the ball and gets a little lower will get the rewards his deserves.
Joe C was excellent as always in the tackle and looks to be a prospective backrow in a few years. It was he that got the champagne moment though when asked to play for the opposition. A great tackle on Charlie S preventing another try. The same can be said for debutant Ronan O. who looks to be a find as another fearless tackler. Max O and James E. also tackled well for both sides. No lad grumbled or moaned and all wanted to play for the opposition – a great bunch of lads.
Credit to West Academy ,(formerly Woodlands), who are rebuilding their Rugby. They tackled and ran their hearts out. With pressures upon schools and PE teachers for exam results rather than life experiences it is good to see old rivals up and running again. In my experience though the best sporting years often get the best results off the pitch as well.  Much can be learnt on a Rugby field about yourself and the people around you,(whether it be through a win or a loss).
Man of the match goes to Josh E who showed great individual talent and linked well. He showed vision, pace and skill in beating players and retaining the ball. Image: Josh with pack leader and mate Lewis S after the game.
Southam try scorers: Harry L 6, Charlie S. 4,  Josh E 2, Thomas H. 2, Lewis S 1, Charlie F 1, Austin O 1,  Ali M 1.
( 18 tries – 0) 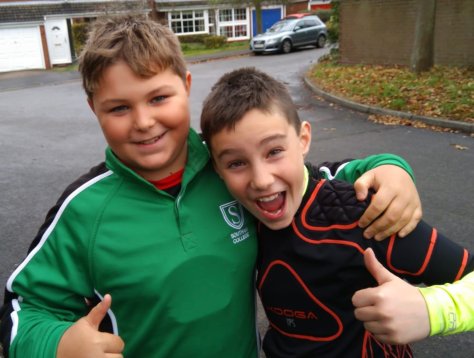