The girls started off with a tough game against NLS, this was the first time the team had played together and they worked hard to move the ball forward into space. A.Griffiths-Standage defended very well but unfortunately NLS got a few goals in the second half, Southam lost but were positive going into the next game.
Southam then played Campion and had a very strong start, the team worked well passing the ball through the court, focusing on moving forward into space rather than running away from the ball. As the team developed their confidence they took the lead and finished the game with a win!
Southam then played Kingsley, where shooting from F.Eales and H.Freimanis excelled, Southam took the win 11-0! In the next match against Kings High, Southam fought hard to defend the ball, I.Hill and M.Thompson pressured the Kings High attack. Kings High were well drilled and eventually stole the lead in the second half.
Southam were positive going into their game against Kenilworth, S.Power as captain had a great attitude to supporting the team and as the game began, F.Mew and H.Freimanis worked well with G.Stephens in attack, moving forward into space. A very close match that ended 4-3 to Kenilworth.
In the last game against Myton D.Cotter gave 100%, intercepting a staggering amount of passes from the opposition. J.Buhour had a great game shooting and maintained composure. This game was extremely close and Southam fought hard to keep possession. In the end, it finished a draw as the tournament came to a close.
I was extremely proud watching the team go from strength to strength in each game. The team listened to feedback and worked hard for each other, supporting and staying positive throughout.
Thank you for a lovely evening of netball!
Player of the tournament: Holly Freimanis for her versatility and outstanding shooting.
Miss MacLachlan 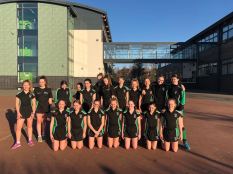